We have been selected by Barnaby Joyce, Malcolm Turnbull, Tony Abbott, Gina Rinehart and Matt Canavan to head up a committee tackling alleged “Global Warming”. Our company Global Cooling is a ponzi, pyramid scheme designed by the best Irish accountants, tax advisers and money launderers in the business. We are about to receive squillions of dollars from a Conglomerate of mining mafias, merchant bankers, NBN Co, leading lights of the National Party, the Australian Treasury and Donald Trump Enterprises.

The reason for their generosity is that we came into possession of this photograph which would appear to suggest an unwelcome future for Australia in the event of the forthcoming global warming: 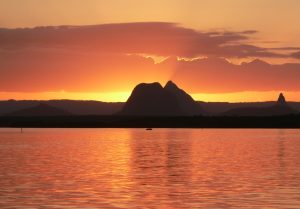 We pointed out that the photo seems to reveal that Australian is sinking into the sea. Already it would appear to have submerged Gosford and if it weren’t for a huge black Dutch designed dyke holding back the water it would have already submerged Brisbane and Carnarvon.

Our speciality is global climate change denial. For that reason, we are backing federal government non-repayable loans to Adani to build a railway line to open up the Galilee Basin where Gina also has a huge coal lease. We support oil drilling on the Great Barrier Reef before the water gets too deep to explore there. We are backing Oil drilling in the Great Australian Bight using wind power to run the drilling rigs. We are supporting a massive expansion of krill netting as a more humane way to slaughter whales. On land, we argue that widespread forest clearing will end desertification by making room for more rain. Our slogan of “Coal before Gold” we think will bamboozle our opponents.

I am writing to you personally to suggest you mortgage your house to the hilt, sell your children to dog food manufacturers, steal what you can and convert it to hard currency in order to buy the biggest percentage of Global Cooling as you can afford in order to make a killing when the afore mentioned Conglomerate comes good with their promised funds.