Just north of Brisbane is Bribie Island. On a clear day, it is visible from Sandgate. It, like Morten and Stradbroke Islands, is a sand island. A shallow protected, but navigable for shallow draft vessels up to 8 metres, is a passage which runs all the way to Caloundra. A costal city my parents moved to just prior to retiring.

Mt Tibrogargan on a foggy day in the Passage 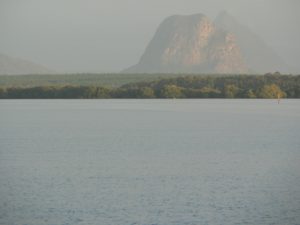 At the southern end of Bribie Passage is a safe entrance from Morten Bay; whereas at the northern tip there is a constantly changing dangerous bar out into the Pacific Ocean. Tom Petrie records that at the turn of the 20th century large hauls of Snapper were regularly caught by netting at the southern end. This netting and the frequent predations since explains why catching a legal Snapper in the Passage now is a rare treat. 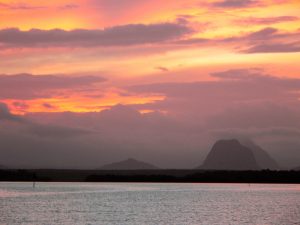 As recently as 2014, I’ve seen Dugong grazing on the eel grass beds towards the southern end of Bribie Passage. They are probably still there. I hope so. they are beautiful gentle warm-blooded animals who breastfeed their young. 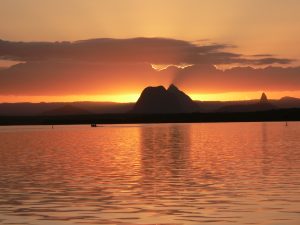 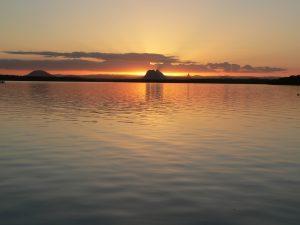 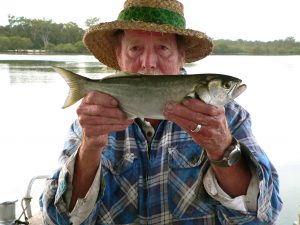 Many times, I got busted up by large Cobia (Black King Fish). One time I was fishing with and old mate of mine from Darwin, Babe Damaso, when a Cobia hit my rod. The reel contained 500 metres of 6 kilo line which quickly emptied. As I was getting towards the end I asked Babe to pass me a heavy hand line which I attached to the rod and threw it over board. I eventually retrieved the rod, sans fish. 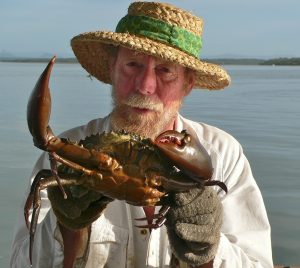 In more recent times I have caught Tailor, Bream, Dusty Flathead, both Sand and Winter (Trumpeter) Whiting, the rare Snapper, Sand and Mud Crabs, dropped one large Threadfin Salmon after 15 minutes and more than enough Shovel-Nosed Sharks and stingrays of many persuasions.

But when you are working in Brisbane and only have 24-30 hours to go fishing Bribie Passage at least is easy and provides a good chance for a feed of fresh sea food. If the fish aren’t cooperating you can always sit back and watch the sunsets. 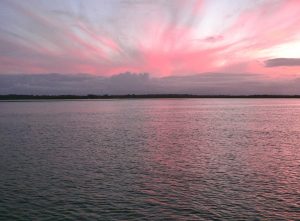