I first heard of the Swains was in 1960. I was hitchhiking from Brisbane to my home town of Gympie. I had been dropped off just south of Nambour and waiting there was an older bloke, Ben, also trying to get a lift north. I must have been about 18 years old and he was pushing forty. Ben said he was heading to Gladstone for another season fishing on the Swains Reefs, which lie between 100 to 150 nautical miles to the north east of Gladstone.

His hands were callused and bore many signs of wire cutting deep into them. He told me the crew he fished with trolled around coral bombies. They mainly used piano wire with lures towed behind dinghies. They caught mainly Coral Trout and Spanish Mackerel. They fished about 12 hours each day before returning to the mother ship.

My fishing up till then was beach and estuary fishing, or fresh water fishing for Spangled Perch in dams on my Uncle Jack’s farm and fishing in the Mary River for Tandan (eel-tailed jewfish) and Ceratodus (Queensland Lung Fish). The stories Ben told of the Swains became etched in my mind and I determined to get there to fish, one day.

Sunrise on the swains. 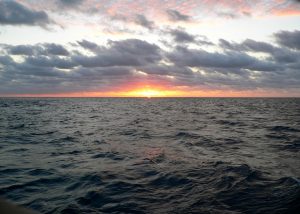 By the time I returned to Queensland to work I had bought a 6.5 metre half cabin cruiser which needed a Troop Carrier to tow it and most of my salary to keep them both running. I never seemed to have the readies to pay for a week-long fishing charter to the Swains.

It was many years before I was prepared to sell the cabin cruiser. With the funds from the sale and a retirement package I was cashed-up and so my old fishing mate Graham Schlecht and I determined that a trip to the Swains was in order. A few of my rich mates had been there annually and reckoned it was great.

Graham and I signed up with a group who had chartered the Booby Bird. So, one cool morning in late July 2012, Graham’s red Statesman arrived, I packed more gear than I needed and we headed off.

Gladstone harbour had once been a very productive fishing area but in the couple of years before we arrived there had been continuous outbreaks of red ulceration on the skin of fish, particularly Barramundi, which the professional fishers said was caused by pollution.

Queensland Governments of all political persuasions refuse to listen to conservations. They want to mine anything they can find, chop down what isn’t moving and shoot what is. They managed to approve two multi-national gas exporting terminals built on reclaimed land adjacent to the port. The runoff, from the poorly reclaimed land, was eventually found to be a major source of the pollution which led to the ulcers on fish skins but not before all the approvals to build the gas export terminals were in place.

By 2017 these gas exporting terminals meant Australia became the world’s largest gas exporter. These Gladstone terminals had succeeded in halving the price the price of gas in Asia and trebling it in Australia.

Graham and I arrived in Gladstone far too early to board the Booby Bird. Graham refrained from mentioning that, not for the first time, my eagerness to go fishing meant we had arrived hours early. Eventually, everyone and everything was aboard and stored and we headed off into the night. 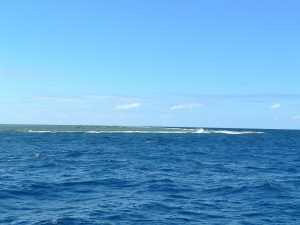 After breakfast parts of the outer reef began to appear on the horizon and at last we anchored in a sheltered area between reefs. Graham and I headed off in one of the dinghies which had been lowered over the side by a crane. 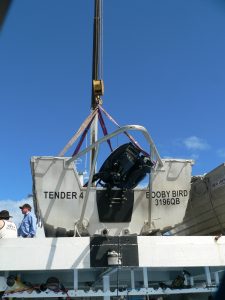 I caught a Coral Trout which I managed, later, to get Graham to hold for a photo. Graham caught several good sized Red Throat Emperor, a species I had never caught. By the time we returned to the mother ship my bum was bruised from bouncing on the waves and I determined to stay on board the main vessel for the rest of the trip. 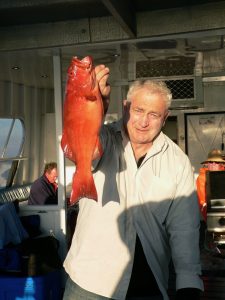 The cook came down with the flu which he generously shared with nearly everyone on board. I caught a Chinaman Fish which are totally protected in Queensland waters, not because they are endangered but because they are particularly susceptible to storing ciguatera toxins in their flesh. Graham was the only other person who caught one on that trip. After Graham caught his I announced that he and I would hold a seminar on the catching of Chinaman Fish at 5am the next morning. We didn’t get any takers. The picture shows the captain releasing Graham’s Chinaman Fish. 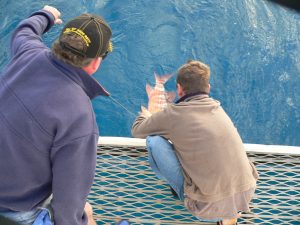 There were several species of small cod caught which I had not seen before. 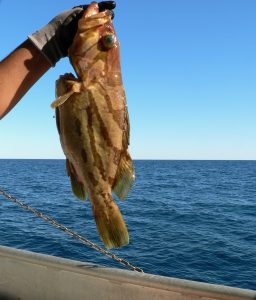 After a couple of days, and probably after everyone else, I managed to catch a small Red Throat Emperor. 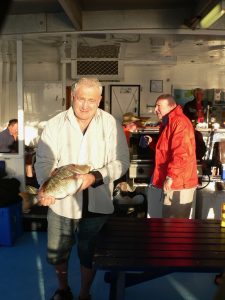 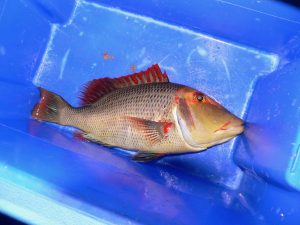 There was one fish I had read about but never seen caught. Even though several of the group had done as many as 19 trips to the Swains they could not recognise it. I declared it to be a Maori Sea Perch and then went below deck to retrieve a couple of fish identifying books which I had packed so as to be able to convince the non-believers. 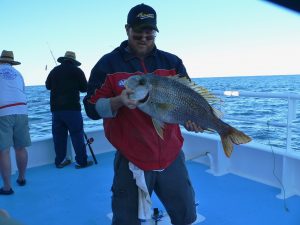 The distinguishing features are the lines on the face which are thought to resemble Maori tattoos. 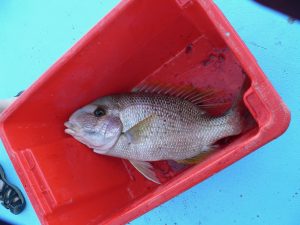 It was a pretty rough trip back. During the trip back Graham casually mentioned that the Booby Bird had sunk on its maiden voyage and had been substantially reworked. Despite this it had sunk on one other occasion. I was grateful that he had not mentioned the Booby Bird’s propensity to do submarine impersonations until Gladstone hove into sight. In the end we were glad to be back in that polluted harbour.

Sunset on the Swains 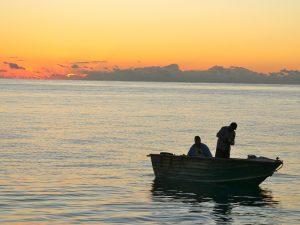 The catch was divvied up and we set off for home. Graham has an amazing capacity to drive long distances without seemingly to get tired but I struggled to stay awake so he would have someone to talk to. About 3 o’clock in the morning we drove into the northern outskirts of Gympie. We were both starving and Graham pulled into a MacDonald’s parking lot. I had never been in one before. They eventually served something that looked like food. It was the first and will remain my last culinary excursion into one of their franchises.